GGBet is one of the main providers of eSports betting in India. It doesn’t function as a regular casino or bookmaker. The website is solely focused on online games, as a hub for gamblers to come together and bet on their favorite plays. The operator features a list of the top-rated and most played games worldwide. Clients can tune in for new events and tournaments, place their bets, and follow up on the latest scores.

Online gaming has been growing its roots among this generation for quite a while now. With the rise of reputable video games, like League of Legends and Call of Duty, gamblers got interested as well. Brands like Redbull and Coca Cola usually sponsor new events every year. This has led to the rapid growth of the industry and consequently increasing the fan base of these games.

Nowadays, hundreds of thousands gather to watch streamed tournaments of eSports teams. Punters also enjoy placing their bets on such events just like any regular sport.

As we stated earlier, GGBet tries to incorporate as many games as they can onto their platform to please a wider scope of audiences. There are tons and tons of video games played every single day. Obviously, it won’t be wise to have them all on the same website. But this operator brings their customers the elite tier of online games out there.

One of those games is League of Legends by Riot Games. It’s a multiplayer video game where two teams of five compete against each other to conquer the base of the opponent. Each player is called a “Summoner,” where they basically summon one champion onto the arena and control it throughout the whole match. It takes both skill and strategic thinking to become a successful LoL player. League of Legends is deemed quite popular among videogame enthusiasts, with around 80 million players a month. With various tournaments and events around the globe, betting on League of Legends has actually become a sensation.

Another one you’re most probably familiar with is CS: GO. It’s one of the oldest first-person shooter games in history. Literally anyone who’s interested in gaming has played Counter-Strike before. GGbet CSGO betting is among the ones most gambled on through the platform. Punters are familiar with how the match goes between the teams, and skilled players in this one receive massive public acclaim.

The platform also supports GGbet Dota 2 gambling. This one is a lot similar to League of Legends. It was created before the latter. However, LoL seemed to drive more players to their creation. DOTA remains a pillar into this type of gaming, with fans and players around the world.

Whether you enjoy playing or not, eSports betting is still available for you to get as much excitement out of it as possible. GGBet online betting allows punters to place different kinds of bets on their favorite video games.

It differs from one video game to another, but some bet types work on all kinds of games. The most common would be Tournament Winner, where punters place their bets on the winning team in a given series of matches. There’s obviously a single Match Winner.

When it comes to first-person shooting games, there’s a bet on First Kill and also the number of kills a team manages to get.

Other Popular Sports To Bet On at GGBet

Other choices on GGBet would be Overwatch, Halo, Call of Duty, and StarCraft 2. All of these are classics and known to gamers anywhere. There’s also the world-famous card game called Hearthstone. You’re probably familiar with this one, as most creators on Youtube tend to favor making videos on it.

There’s also Smite, which is a rendition of League of Legends. But instead of being a Summoner, you get to play the champion you choose from a first-person perspective. It lends this type of video game a whole new experience.

Aside from that, you can bet on something sporty, like NBA 2K18. Or if you’re into violent and adrenaline-inducing video games, you might be interested in World of Tanks. It was released back in 2010 and has gained many players ever since.

Esports betting is fun, but having a bonus on your deposit can make it a lot more enjoyable. This sportsbook offers players in India many bonuses and promotions on a regular basis. They have a dedicated page on their official website where they announce new promotions. Usually, a GG.Bet bonus is concerned with a specific video game that you can bet on through the website. It doesn’t have to be a new user for the promotion to apply to the account.

Unfortunately, GGBet doesn’t have an official app for smartphone users. However, the mobile version of the website is just as good. It’s quite responsive, compatible with most devices and sizes, and doesn’t lack any of the functionalities experienced on the desktop version. If you want to use the platform on the go, you won’t have any problems doing so. Just access the website with any mobile browser you like. Type in your account and you’re good to go!

GGBet accepts different kinds of payment methods to make it easier for clients to deposit their money. The website accepts Skrill, Visa, Mastercard, Neteller, and GGBet Paypal. There’s no payment method better than the other. You just use whatever you like. Some might have short delays, though, in how the transactions are confirmed. However, your money would be credited into the account as soon as everything is cleared out.

GGBet eSports integrates top-notch customer support to help out players on the platform. You can reach out to their customer support center through both email and live chat. Most punters prefer the latter, as it’s much more lively and efficient. However, your queries would also be answered if you opt for sending them an email.

So Is It Worth Placing Your Bets At GG.Bet

In all honesty, we like the idea that a certain platform is dedicated to eSports betting. And GG.Bet has done quite a good job in that regard. The platform has a design that suits gaming enthusiasts and is comfortable to the eyes. It’s also quite easy to use. The platform is secure, and all transactions are encrypted. And, as we mentioned, they incorporate as many popular video games on their website as they can. It’s always a plus for those interested in eSports to have their favorite video games in one place. We’d say it’s worth it placing your bets with this operator. 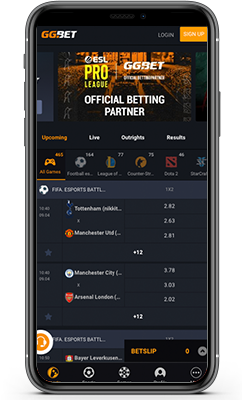