Its betting portfolio comprises a range of eSports tournaments, events, and games. Players who don’t want to play for real money can play for free using the Play Money feature. The bookmaker’s 4.6% odds margin is pretty competitive in comparison with others.

This is because Egb bets on top teams from League of Legends or Dota 2 don’t usually earn fans large sums of cash. However, if they place wagers during the early stages of the competition using accumulator style betting they can benefit from competitive odds. The bookmaker also offers impressive betting limits that cater to all types of players.

Apart from these three popular sports, the company has a live streaming feature that allows players worldwide to bet real money while watching the games. The live-action is available daily, and it has been integrated with a live chat feature that enables fans to interact. Also, fans can leverage changes in the score-line to make substantial profits. This is because backing the matches halfway through a game increases the odds significantly.

It has more than ten esports games players can bet, and each title has different bet types. Punters looking to bet on Rocket League, CSGO, and League of Legends should place outright winner bets for big tournaments and match-winners for competitive play. What’s more, during the tournaments, the bookmaker displays the native country of each competing team using a small icon to make it easy to place bets. Here’s a detailed overview of some bets:

The site matches up the player’s initial deposit by 100% up to a maximum of $600. The bonus is awarded in five portions for an extended period so the player can engage in lol betting or Dota 2 betting. Since each bonus amount can be used within a three-month period, players can wait for more rewarding tournaments to place bets.

Points program: The site awards players 10 points for every $1 spent on betting at the odds of 1.30 or more

Referral program: The site awards $50 bonus to players who refer friends to the site

Initially, the operator did not have an app, but the website was mobile responsive. As such, fans can play using a variety of devices. Whether the player is using an Android, iOS, or Microsoft OS, they could access the site.

Later the bookmaker developed an Android app with a new attractive logo. With Android smartphones that support third-party apps, users can download the app.

The eSports online betting site has a range of banking options, including traditional and e-wallet methods (Visa, Neteller, Skrill, among others). The deposit time varies based on the banking option used, but withdrawals are processed within 24 hours. Also, punters withdrawing more than once a month are required to pay a fee of 4% of the withdrawal amount.

The bookmaker provides a variety of customer support options, including:

The site also has a detailed FAQ page for self-service and a live chat option for users looking for urgent responses. The customer representatives are well-versed in different languages, so punters are confident about finding help.

So Is It worth Placing Your Bets At EGB

EGB Sportsbook remains a leading eSports betting site since its inception. The wide range of eSports events, competitive odds, and different markets to choose from makes this platform a good bookmaker. Also, the inclusion of a live stream attracts many users as they can interact with other EGB esports fans during CSGO, League of Legends, or Dota 2 tournaments. What’s more, the integration of common sports like Rocket League, Smite and Overwatch means the bookmaker caters to a large audience 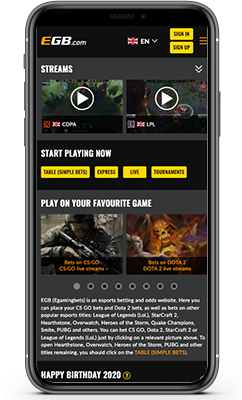